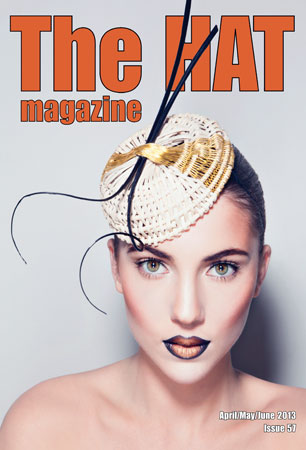 April/May/June 2013
The HAT Magazine – Issue 57 – See below for contents of this issue of the magazine.

All prices are inclusive of postage.

Travels with my Hat Six days in China: Finals of ‘The Hatters’ Hub Cup’ China’s first International Hat Competition; Hat lectures at Beijing and Shanghai Universities; A visit to The Foremost Hat Company in Nantong and Retail Therapy: Hat shopping in China

A Conversation with… Jeffrey Sun, M.D. of The Foremost Hat Company, Nantong, China

It’s a family Affair Working with your family, we talk to three successful hat companies, showing at Who’s Next, who have taken the ‘en famille’ path

Trade Fair Reports The hats and the looks for AW13/14 with our round up of this season’s trade shows, from Paris, Düsseldorf, Birmingham and London

Looking Ahead The colours, fabrics and trims for SS14. We report from Première Vision and Mod Amont

News, Views and Events The latest hat trade news including coverage of: The opening of ‘La Chapellerie, Europe’s largest new museum dedicated to the felt hat; The Feltmakers Design Awards of 2013