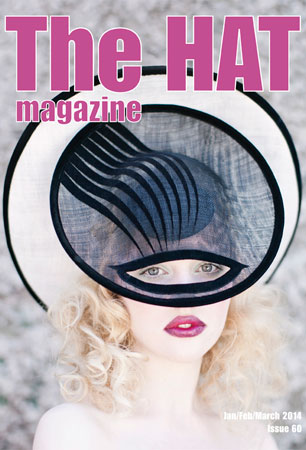 Jan/Feb/Mar 2014
The HAT Magazine – Issue 60 – Out Now!
See below for contents of this issue of the magazine.
All prices are inclusive of postage.

The Ireland Issue
Travels with my Hat… to Ireland, for a Grand Tour, meeting the manufacturers, the milliners, the retailers and tutors and a visit or two to the horse-racing

Melbourne Cup Carnival The hats, outfits and fashions at the 2013 event

Trade Fair Reports The hats and the looks for SS14 with our round up of this season’s shows, from New York and Ireland

News, Views and Events The latest hat trade news including coverage of: ‘Crowns’ an exhibition by the alumni of Kensington & Chelsea College; competition launches; a look forward to London Hat Week and obituary of Royal milliner Frederick Fox LVO, with tributes from his friends and colleagues