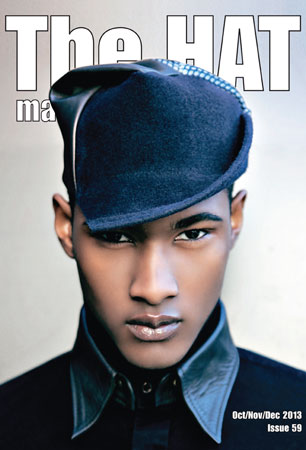 Oct/Nov/Dec 2013
The HAT Magazine – Issue 59 – Out Now!
See below for contents of this issue of the magazine.
All prices are inclusive of postage.

Travels with my Hat… to São João da Madeira, Portugal, a town born of hats and felt. We knew that for many years Portugal had been paramount in making fur felt, but we never realised the extent of the industry before our visit

Hat Festivals We travel around Europe for a summer of hat festivals, visiting: The Bridport Hat Festival in Dorset, England; Estivales du Chapeau at Caussade and Septfonds, France and judge their annual international hat competition; Chapeau Moscow, in Russia and Mut zum Hut in Neuburg, Germany

Workroom Technique Making a soft beret from a flat pattern

Trade Show Reports Hats and accessories for SS2014 with our round up of this season’s shows. First Düsseldorf visiting: DATE; the Fashion Houses; The Gallery; Hall 29; Double U and Premium. Then to London for: Scoop; Pure; London Designer Exhibition, including Headonism and to Birmingham for Moda UK. Then to Paris for Capsule; Tranoï; Première Classe and Salon Chapmod

Looking Ahead The colours, fabrics and trims for AW14/15. We report from Première Vision and Mod Amont

Hatty Christmas Some suggestions for hat-tastic presents, for the hat fanatic who has everything